Outdoor Diary: I’ve Gone Outside Every Day for Four Years 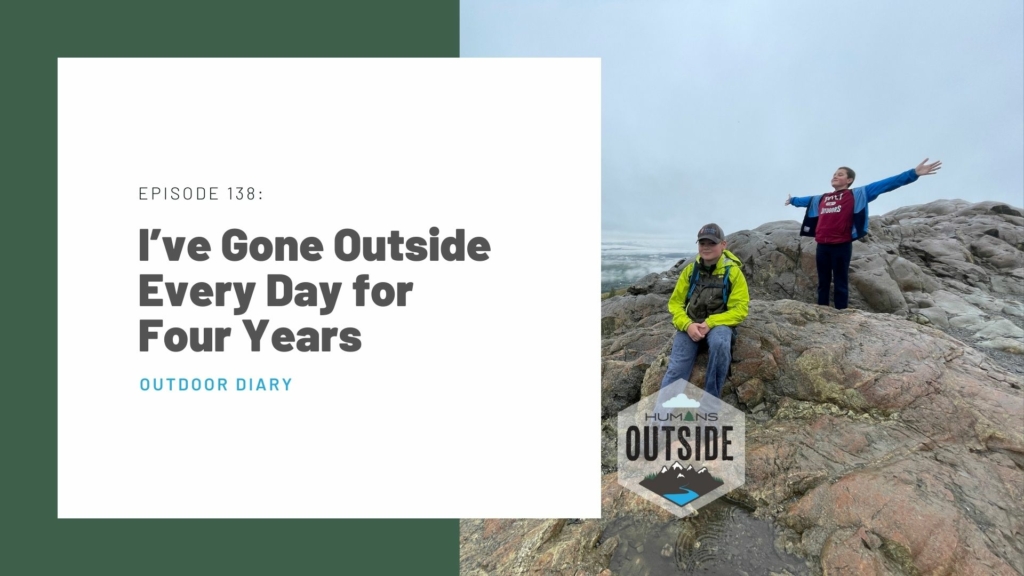 It’s been four years since Amy started her daily outdoor habit. In this episode of her weekly outdoor diary, Amy reflects on how keeping that habit has not just influenced her, but impacted the people around — her friends, family and even you.

[2:59] Spending time outside as a parent

[4:08] How heading outside impacts those around us

The day I decided to first test whether I could or even wanted to go outside every day was a wet, rainy day in May 2017. I was annoyed that it was Memorial Day weekend, the traditional beginning of summer, and cold and rainy. So I decided to make myself go outside every day all summer and see what kind of adventures turned up if I was looking for them. And boy did we have a great time. Camping! Hiking! Picnics! Festivals! It was amazing what I found when I was looking for it.

The day I decided to change my challenge to something more specific and reset for a year, I was walking an easy, flat path along a creek off Portage Lake and glacier. It was late July and I was with my friend Holly, who had taken me up on an invite to come to Alaska and see what it was all about, something we planned thanks to my summer challenge. We were chatting about what I would do when my summer outside ended. And we decided I would, obviously, keep going outside. And my idea for a year of 20 minutes outside every day was born.

Maybe you know this story already. Maybe you heard Holly interview me for the season premier of Humans Outside season 4. But spoiler alert — I didn’t stop after a year. I kept going and now it’s been four years. On the episode Holly interviewed me about what I learned by heading outside every single day for four years. It was a lot of fun talking about that, and I won’t rehash it here.

But what we didn’t really talk about in that episode was how spending four years outside has had an impact on my family and those around me — and what that looks like. So I want to take a minute or two to think through that here now.

It makes sense that because I am married, what I do and make a priority influences my spouse. Even though going outside was always a priority for him, even before it was a priority for me, my outdoor habit made it an even more important part of his life. As I was looking for times and ways to go outside, he was eagerly joining me. Thanks to my habit we now are people who go outside together, and we build the things we like to do around spending time in nature. Because of my habit I understand the value he finds heading outside, and I actively encourage him to get out as often as he can for as long as possible. And he understands that same value for me, so he supports all of my outdoor endeavours.

And because I am a parent, heading outside also influences my kids. As we camped recently and I watched my 9 year old, Huck, play in the bushes with a stick, doing his normal wandering around having some kind of make believe game, I had this flashback to all of the times he has done this, starting when he was just learning to walk and we first started spending time outside together. We lived in Tennessee, and we spent so many weekends at the Land Between the Lakes in an area between Kentucky and Tennessee camping and exploring. Spending time outside is all he has ever known, and there’s no way it has not fundamentally influenced every part of who he is.

And even more than that, I couldn’t imagine him being anyone but the kid who runs around the woods hitting stuff with a stick. It’s just so … him. Who would he be if we didn’t have this habit? How would he approach the world now? And will this habit change who he grows up to be?

Those things are, of course, impossible to know. But as a parent I hope that we’re creating a way of life for him and for his older brother that impacts them in a positive way.

My outdoor habit also has an impact on those around me. That was true before I started a podcast about it, before I started talking to YOU about it. My friends and family see what I’m doing. They join me. They spend time outside because they see how happy it makes me. And that’s because, as they say, “a rising tide lifts all boats.” When we do something positive for ourselves and take positive action, it influences for good those around us. And of course that includes you. You’re listening to this and keeping your own outdoor habit, and you, I hope, are encouraged by what I have done. Because that’s the whole goal.


If you’re trying to keep that habit or get it going on a long term basis, the episodes you can hear over the first few weeks of Humans Outside season 4 should help. My conversation about my own habit in episode 1 and the two conversations I have with habit experts and keepers in episodes 2 and 3 could go a long way in inspiring you to keep that habit.

And of course, as always, you can see photos from my daily outdoor time, my daily habit, on Humans Outside on Instagram and Facebook. And please share your photos with me by tagging me with #humansoutside365. Until next time I’ll see you out there.

Outdoor Diary: The Stories We Tell Ourselves About Who We Are