Outdoor Diary: This Summer I Made Time for This New Outdoor Tradition, and It Was Great 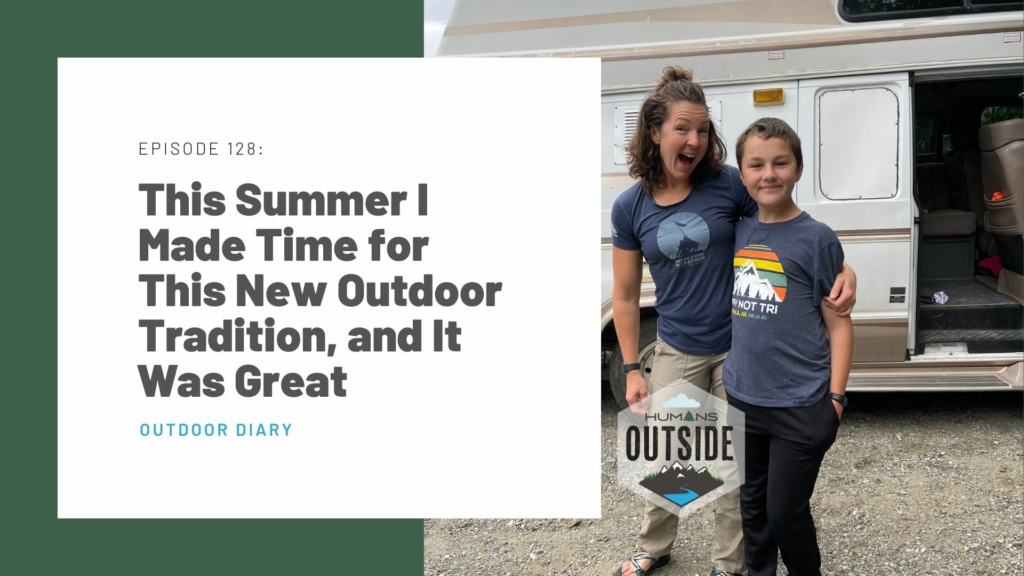 When a podcast guest for the upcoming Humans Outside Season 4 suggested a new outdoor tradition she has with her kids, Amy knew she had to do it. Now that it’s in the bag, she’s got one thought on how to make it better: focus.

Have you ever had one of those moments where someone suggests something brilliant but simple and you wonder – hey, that’s fantastic, why didn’t I think of that and I’m totally doing that?

I’ve been working hard to prepare for Humans Outside Season 4, which will premier in early September. And as I’ve been doing that, I’ve been interviewing some really incredible people about their outdoor lives and big ideas. One of them is Melody Forsyth, whose episode you’ll get to hear a little ways into Season 4. Melody’s family started heading outside for togetherness and health after her special needs daughter, Ruby, was born. Her efforts have since grown into an advocacy effort raising awareness around Down Syndrome and showcasing how they make nature a part of their lives. You can check her out on instagram at Downwithadventure.

But one of the things she talks about in our interview is her effort to take each of her children on an outdoor adventure of their own, one-on-one with her, doing things that they’ll like but that will challenge them. One of the things we’ve learned here is that one person’s outdoor challenge differs from another’s, and that’s totally true with kids, too. What challenges one kid might be easy or boring for another.

When I heard this idea from Melody I had that why didn’t I think of this moment? And also decided that I was totally going to make something like that a part of my summer. We are really busy in the summer playing outside, so making sure we can take a very specific trip with only part of the family takes some extra planning, but I put dates on the calendar. The kids went to sleep away camp at different times, which created the perfect window to take one on a special adventure while the other was occupied. I also asked them if they wanted to go with mom and dad or just mom. David, who is 12, said he didn’t care and Huck said both parents.

Now, the thing you have to know about David is that he is not an enthusiast. By that I mean he is generally interested in things but not overly into or enthusiastic or excited about any one thing. While his brother, age 9, is really into Star Wars, Dave likes it well enough — but he’s not a mega fan. And that is how he feels about the world. He also doesn’t really like camping that much. So I knew his trip, which would be just with me, should include enough discomfort to challenge him but not enough to make him – and me – miserable.

That’s why I picked an overnight down in Seward. We took the van, camped near his favorite playground, visited the sea life center, went out for dinner and weathered some rain. It was just uncomfortable enough for him to stretch him a little, and he announced when we were on our way home that it was the perfect trip for him.

Huck’s trip was with both parents, but wedged into the middle of the week instead of starting on the weekend. That was challenging from a timing perspective for me, and I wish I had thought that through before scheduling it. Luke took him ahead of me getting off work to spend the day kayaking, which was fine because we only have two kayaks. Then I joined them in the evening, bringing up the camping van. The next day we simply hung out in the campground. But while I think Huck did have a good time, I was distracted by work the whole time and I felt like this trip wasn’t what I wanted it to be. With Dave I had been able to make myself unplug. With Huck I wasn’t as intentional about that step and it showed.

In a way I’m grateful that the two trips were so different in how they felt to me, because it was a huge reminder about the importance of unplugging and focusing on the things around me. Not only would we have had a better trip, but I would’ve actually felt rested from a day off work instead of distracted and not fully focused on anything the whole time. My family deserves my full attention. They deserve to have times that I am unplugged from the outside world and investing only in them. It’s really the least I can do.

From these two trips I learned that spending time with my kids individually in this way is definitely something I want to do again, but I do us no favors by trying to wedge it between work days or by not being intentional enough about unplugging. Heading out with them individually is something I want to repeat next year, or maybe even over a winter trip if I’m feeling brave — heading out for a night in the snow is a whole different kind of thing.

Otherwise, this week has been pretty low key as I slow how much I’m running in prep for a very not low key upcoming weekend: my 100 mile race. Yes, I’m going to run 100 miles. No, most likely not all in one day, but that would be epic. The next time you hear from me I sincerely hope I am a 100-mile run finisher. I’ve been working so hard on this goal, really since I had surgery, focusing only on it as I got my leg strength back. I’ve trained countless hours, run hundreds of miles in preparation, eaten gobs of ice cream, I mean — gobs of healthy food. And I’m as ready as I’m going to be. Wish me luck!

Of course you can still see all the photos of my outdoor time on Humans Outside on Instagram and Facebook, and pretty please tag your outdoor time with #humansoutside365. Until next time, we’ll see you out there.

Outside in Hot and Dry: How to Deal With Blazing Heat (Cassidy Feltenberger)

Outdoor Diary: The 2 Keys to the Best Summer Memories

Outside in Hot and Humid: How to Deal With Sticky, Hot Weather (Joe Jacobs)